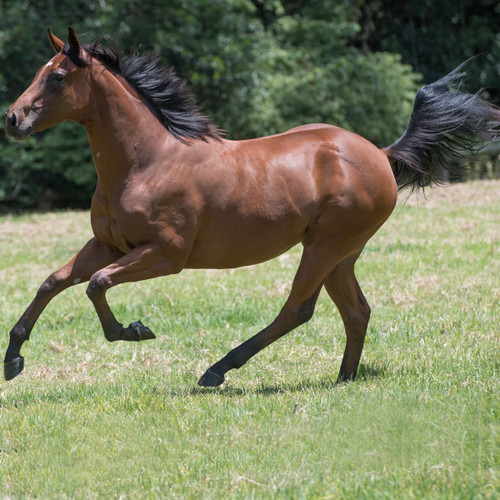 "If anyone wants to jump in now, all the hard work is done. So it's time to just enjoy the ride!"  - Premier QLD trainer Tony Gollan, who is training the miRunners filly Lyrical Girl. He has been impressed by her strong recent trial and progress so far, and is excited for what comes next for the filly in 2019. Final Units now don't miss out!

Your Song, Fastnet Rock’s brilliant colt, managed several wins in his racing career: none more remarkable than his prolific win in the 2013 BTC Cup at Eagle Farm by five lengths, taking out the $405K prize money. Your Song was seen by many as one of the standouts at the colt’s initial parade and was labelled as a magnificent looking colt, a good-looking horse with a great attitude and an amazing style.

This filly can be just as strong as her sire and can go on to do the same thing. She is very strong-willed filly and has been very easy to present new ideas to. She really loves to work, has been great to handle and is one of the farm favourites.

What we also like about this filly is that the mother is by Not A Single Doubt, whose progeny have it all – class, precocity and versatility. It is for these reasons why Not A Single Doubt is a mainstay in Australia’s top 10 sires and why his 33 lots at the 2018 Magic Millions Sale recorded an average sale price of $265,000 with the top price of $700,000.

Proving to be one of Australia’s most reliable sources of early runners, one in five of his runners win at two-years-old, an age which supplies a third of his stakes winners.

From the moment Widden Stud started putting her into work – which continued with her pre-training at Emeran Park – she has really come along well. She has muscled up nicely and has developed nice hind quarters and a lovely walk which indicates she could become a very successful racehorse.

What is super pleasing is that the horse has carried this willingness to work and develop into work with Tony Gollan.

Queensland’s Premiership winning trainer for the last four years running and has tasted Group 1 success with horses such as Spirit of Boom and Temple of Boom. He has won over $31 million dollars in prize money.

Tony has more than 1,000 career wins, has won multiple Group 1 wins has an impressive 26% recent win rate and a place rate of 39%.

Gollan, who was highly enthusiastic to come on board after discovering the miRunners ownership model, says: “Your horse is A very good moving filly, she’s done well while she’s here, very good eating filly and a great attitude towards her work.”

“I’ve said multiple times that she was very well educated before she came here so they’ve done a great job with her down there at Emeran Park.

“In the couple of bits at three quarter pace we’ve done with her, she was a very quick learner, got her legs under herself and really stretched out nicely.

Lyrical Girl has now been nominated for the 2019 Golden Slipper, the world’s richest race for two-year-olds and a Group 1 race run over 1,200 metres at Rosehill Racecourse in Sydney each Autumn, showing that miRunners is serious about racing at the highest level.

The 2019 Golden Slipper is being run on Saturday, 23 March, with top class horses once again competing for a staggering $3.5 million in prize money and the coveted Golden Slipper trophy.

The Golden Slipper, contested since 1957, continues to be favourite amongst trainers, owners and breeders with a record number of nominations for the race in 2018″.

The next “Slipper” is sure to be as highly anticipated as ever, with the quality racing of the day surrounded by glamour, fashion, and racing culture.

Other Group 1 races on the day include the George Ryder Stakes, Ranvet Stakes, The Galaxy and the Rosehill Guineas. A number of great horses have won this event over the years, including recent winners Sepoy in 2011 and Pierro in 2012.

Most recently, Estijaab in 2018 took home the prestigious trophy and the 2017 winner She Will Reign was last month sold to overseas interests.

Lyrical Girl – what is next?

The filly is enjoying a stay at Furlong Spellers as part of a four week spell (relaxing and eating well) but is looking forward to her return to pre-training. She will be leaving the farm this week to commence her pre-training which will prepare her for her next stable prep.

Looking for the perfect gift? Gift a unit in one of our available premium thoroughbreds today.

Click here to view our gift vouchers and merchandise options.